Showers worthy of the Roubaix Velodrome

Café Coureur in the Belgian province of Limburg opened its doors to travelling cycling fans and locals from Flanders in October 2019. The coffee shop offers an immersive concept that is specifically geared to cyclists.

Café Coureur is the brainchild of Bart Gregoor, Peter Lantmeeters, and his son Thomas. The owners’ guiding purpose is to make their guests’ stay as relaxing as possible. As well as offering food and accommodation, the coffee shop broadcasts bicycle races and has a comfortable relaxation area. After a strenuous ride, cyclists can regenerate in the massage room and the wellness facility, while the whirlpool offers a panoramic view of the Haspengouw region.

Because providing the guests with a memorable and comfortable experience is at the heart of the concept, interior designer Patrick Janssen involved suppliers in the planning process from the very start. As a result, they were able to explore optimum solutions together, such as installing higher faucets than usual so that guests can fill their water bottles easily.

The former school was rescued from dereliction, fully renovated, and a modern extension was added. The relationship with cycle racing is the common thread that runs through the design of the coffee shop. For instance, the lobby is a mock up of the venue of the six-day race 't Kuipke in Ghent. The hotel rooms are not numbered sequentially, but instead boast the race numbers of professional cyclists from Limburg.

The showers in Café Coureur are designed to resemble those of the Roubaix Velodrome, which is situated next to the finishing line of the infamous Paris-Roubaix cycle race. While the iconic concrete corner elements have been faithfully reproduced, the suspended metal chains for warm water have been replaced by electronic sensors.

Both the Roubaix showers and the showers in the hotel rooms posed something of a structural challenge: because the hotel is on the site of an old school, the floors could not be raised. The barrier-free room in particular requires the shower tray to be installed as far into the floor as possible.
Duravit was in charge of all sanitary facilities and decoration in the hotel bathrooms and was involved in the project planning from the very outset. As a result, the entire product portfolio could be brought to bear on the design process – from urinals, toilets, showers, and washbasins through hanging systems and actuator plates right up to the faucets, accessories, and mirrors with LED lighting and sensor control. Tempano for instance provided the solution to the structural challenge: being self-supporting, the shower tray can be installed without legs at a low installation depth. 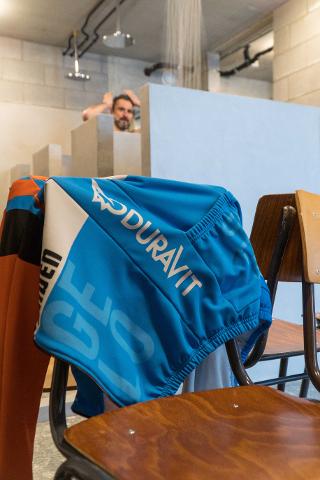 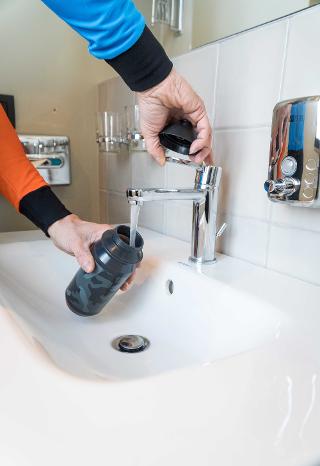