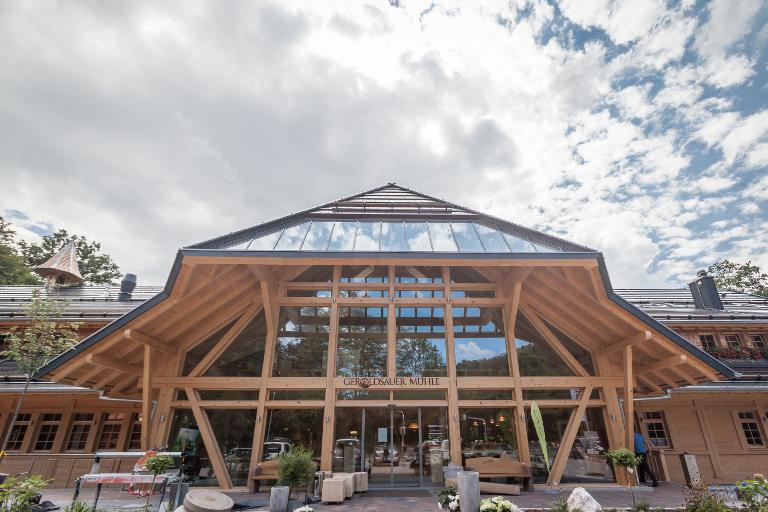 When Martin Weingartner cut the first white firs for his project he wasn’t quite sure yet whether that wood would be used as building material or whether it would eventually end up in the entrepreneur’s fireplace. But his idea convinced the City Council of the City of Baden-Baden - the members voted for the first time unanimously for an infrastructure project. A decision that allowed the construction of the largest white fir building in Germany. It is based on a concept that not only is meant to change Baden-Baden but the image of the entire region. The Geroldsauer Mühle is considered the “Black Forest House of the 21st Century" and already a showpiece.

The white fir, colloquially known as the wood without a transportation route, found a firm place in modern architecture. The versatility and individuality of this tree species meets the requirements of modern design as well as environmental and sustainability requirements. The construction of the Geroldsauer Mühle consumed a total of 7.5 miles white fir beams, which is equivalent to about 24,720 solid ft3 of wood. The entire building, apart from the concrete foundation and the underlying basement, is made of white fir wood - a total of three floors with 32,290 sf of floor space. The 12,360 ft3 of timber used for the establishment of the Geroldsauer Mühle equate to about 100 single-family homes. The family Weingärtner managed such dimensions on its own initiative.

Martin Weingärtner managed the family project as the building owner, while his brother, master carpenter Roland Weingärtner, was responsible for the wooden structure. The white fir was cut in the winter of 2014 according to the lunar calendar in the forest of Baden-Baden and was then cut to size in the own sawmill and left to dry in the air. The extensive planning required that all necessary wooden parts were cut to size and delivered in the correct sequence even before the actual construction start of the mill. Preparatory work that required precision planning. Precision was also required for the construction of the two side wings. The Weingärtner family established the right wing while the framing of the middle section of the building, which today houses the lobby, was still in full swing. Only then followed the left half of Geroldsauer Mühle. Both structures are made entirely of white fir and interconnected with an offset of only three millimeters across 60 meters of wooden structure.

On the outside, the bright white fir timber is weather resistant and durable and on the inside it creates a warm and noble atmosphere. The interior is authentic, modest and not overloaded. It is representative of a region that has a conscious but modern way of dealing with its roots: the Black Forest. The Geroldsauer Mühle is considered the gateway to the Black Forest because of its geographical location and therefore serves as a showcase for the region’s agriculture and way of life. Design products by the bathroom manufacturer Duravit complete the experience, who is also firmly rooted in this region for about 200 years. The company equipped the four guest rooms and the two suites located on the second floor of the mill. Again, the white fir plays the main role and creates a warm feeling in the spaces. The decor is not rustic, but features a modern and authentic blend with its surroundings. Experiencing nature with a distinct design in mind is what is important. Innovative Duravit products, such as the shower-toilet seat SensoWash Slim or the stone-like shower tray Stonetto, made of the new mineral casting material DuraSolid, complement the comfort in the Geroldsauer Mühle. The exclusive suites even feature real designer pieces: Toilets of the ME Series by Starck, created by Philippe Starck, or the sauna Inipi B by the Austrian design trio EOOS ensure a relaxing break. Products from the design bathroom manufacturer were selected once more when equipping the public restrooms.

The Nature Park Market on the ground floor is the actual heart of the building and only the second of its kind in the Black Forest. The concept of these markets is to offer agricultural products like fruits and vegetables from Black Forest farms. This direct marketing opportunity strengthens agricultural enterprises and ultimately the region itself. The Geroldsauer Mühle is supplied by 85 farms. There is also a large show bakery with an automatically driven millstone and a butcher counter of the local brand “genuinely Black Forest”. A restaurant with regional dishes complements the culinary offering. Conference and seminar rooms and exhibition areas about the National Park, Black Forest Nature Park Central / North and the Forestry Commission Office Baden-Baden complement the broad offering.

The large roof of the mill is where tradition and modernity meet: The mill is committed to renewable energy, which is why a 30 KW photo-voltaic system provides the electrical energy required by the building. A bell tower next door with a roughly 88 lbs bell reminds of a centuries-old tradition in the Black Forest. These bells used to call the workers from the field in the old days or announced celebrations to remote farms in the neighborhood. Today, the ringing of the bells attracts visitors from far and wide to experience the modern Black Forest. 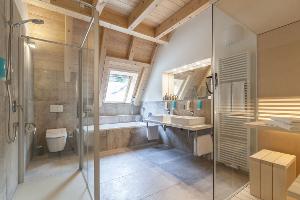 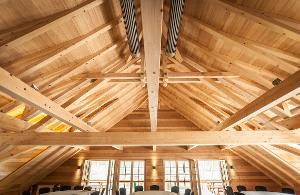 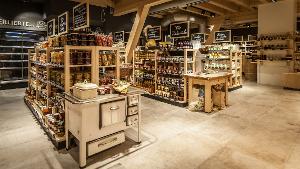 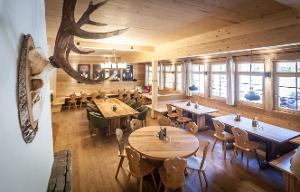